Will Singapore CPF model go down the same path?

granted singapore's cpf model is primarily based on individual savings so there is lesser chance of osmosis of your own savings efforts towards providing for the others who did not save as much.

even so, there is a tyranny of the one size fits all model for CPF resulting in inactive investors leaving their CPF under 2.5% p.a. which in today's world will not retain your prosperity in the global context any further. a comparison of the greying population under the european system (minus the state pension that puts the younger generation under the yoke that provides for the older generations that had spent and spent) with the new rising asian generations rapidly reaching majority middle class, sees the prosperity of the former unretained.

Voting in a populist government will certainly make life easier for a whole generation of Singaporeans to live off the reserves built up previously. But how long and how soon before it becomes yet another enslaving of future generations?

As the working population ages, more money gets put away, which in turn also helps drive yields lower. Pension funds among countries in the Organization for Economic Cooperation and Development, for example, have reached a record $25 trillion.

"There are a lot of very negative feedback loops," Credit Suisse Chief Executive Officer Tidjane Thiam told the audience at the Bloomberg Markets Most Influential Summit in London this week. "There's been a glut of savings that impact real interest rates. You can't make any money on the assets, and the liabilities explode. People born in 1968 and the following 15 years will have an enormous pension deficit because they've made nothing on their assets." 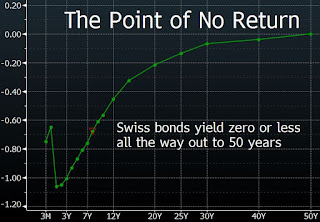 Jim Leaviss, who helps oversee about $374 billion at M&G Investments in London, argues that the world demographic picture suggests bond yields should be much, much higher than they are. In the past, projecting population changes gave you a good guide to what economic growth would do, how labor-market supply would affect wage demand and inflation, and how demographics would affect production versus consumption of goods and services.

Those economic indicators in turn told you where bond yields would likely settle. Using that model, Leaviss says the 30-year U.K. gilt yield, for example, should be closer to 12 percent than the 1.4 percent the government currently pays to borrow for three decades, with U.S. Treasuries similarly mispriced: 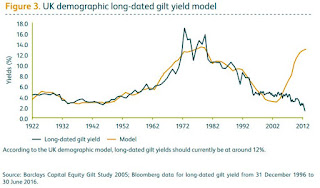